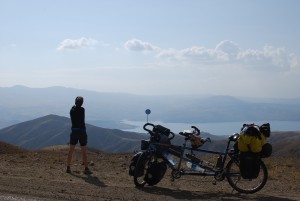 So far I’ve been a little lazy in posting on our blog in the language of Shakespeare. Not only for lack of time, but because it is often difficult to translate so many emotions and intense moments into words, even more so when it is not your mother tongue. I’m happy to try to remediate this situation now with a short post on our first two months and 1700 km!

We left Paris on the 13th of September. François and I prepared for 2 months before leaving. FLB was lent to us by our friends Manu & Bea who did Alaska-Ushuaïa 10 years ago! 4 legs, 2 wheels and a 1 year adventure! (See the page 4+2=1 and resolve the equation yourself!) Only 2 months have passed and yet, it feels like we’ve lived so many things since we left the bus station, split between excitement and heavy hearts. 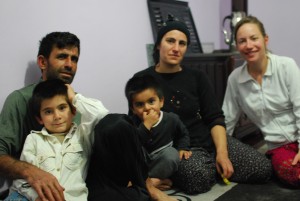 Since the very first day of our trip, when Zjelco and his family princely welcomed us in Belgarde, we’ve been litterally amazed by the hospitality Serbs and Turks have shown us. Zeljkoo, Jasna and Nico in Belgrade, Momir in Krusevac, Stanisla in Dimitrovgrad, Seki in Milosevac, Dagan and his family in Donji Ljubeš, Saghit and Telha in Eskeşehir, Mehmet in Elazig, Nejla and Murat in Içme, Zerrin, Musab & Mücahid in Istanbul, … the list of those who – without hesitation- opened their doors to us is lengthy!  And never would we leave their place empty handed, but rather with kilos of food! We could never thank them enough for welcoming us in their homes so warmly. They truly make the trip worth it. 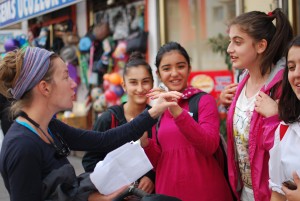 Although the language barrier would make it difficult to hold in-depth conversations, we were quickly reminded that there is – and always will be- a universal language that we share. One which makes it possible to spend evenings of laugther. One safely kept away from political interference. One which speaks through the eyes.

Energized from these encounters, I slowly learned to “tame” our tandem FLB (in the end I’m not sure which one of the two tamed the other!) Despite sore muscles, knee pain, cold and wind, your body slowly get used to cycling every day (or so), while you slowly get addicted to this way of traveling!

From the flat itinerary we’ve chosen to do in Serbia, we’ve then switched to a slightly more hilly one in Turkey. Passing through lakes, Central Anatolia with its great plateau (and not so great huge Kangal sheppard dogs!), wandered in the magnificent Phrygian valley and the impressive Cappadoccian region (classifed World Heritage site), its underground cities and troglodytes houses. Before returning to Istanbul, we had a glimpse at the beautiful mountains of Eastern Anatolia (and less beautiful army tanks passing by in this tensed region of decades of conflict between the government and the PKK). 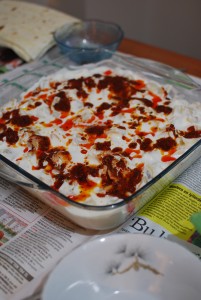 Finally, we were lucky to get invited by Musab and his brother Mucahaïd in Istanbul. Happy coincidence (particularly in a 12 million people city): we found out Musab is a good friend of Zerrin which we had met a month before on our first day in Istanbul. We had an amazing time with our Turkish friends and even got to cycle in the city by night! Teşekkür ederim once again!
As far as food goes (because I’m a big fan of eating!), we’ve been lucky enough to taste homemade food of the families that have welcomed us in their houses, from burek to stuffed paprika in Serbia to manti (kind of meat ravioli with yogourt sauce) in Turkey. And of course, countless “çay” (Turkish tea) on the road!

Two months and already so many memories. I think I definitely got the “bike traveller’s bug”! We are about to start the Indian chapter of our trip, more news soon to come!

And here’s a short video in action!